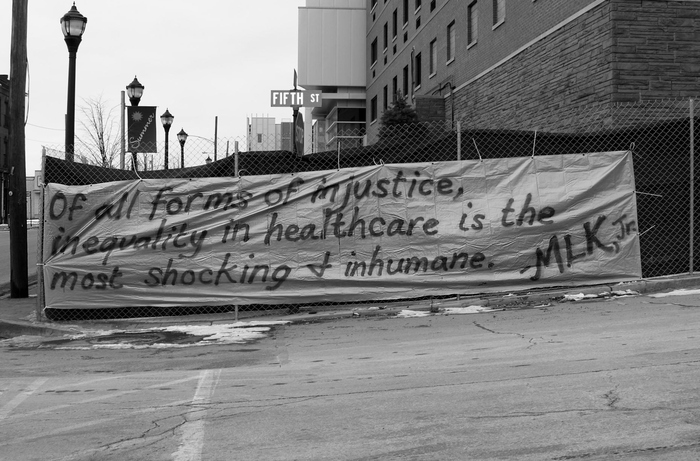 “Of all the forms of inequality, injustice in health care is the most shocking and inhumane.” Martin Luther King Jr.

With the recent grand jury decision not to indict police officer Darren Wilson for the shooting death of Michael Brown,  Ferguson is again in the news. The protests and aftermath of the death of Brown have stimulated heated debates on civil rights, police brutality, and segregation/racism within Ferguson and the nation as a whole.

Since the August 2014 death of Brown, much has been written about the inequalities within Ferguson, which is an inner-ring ethnoburb  that has seen a startling shift in its demographics in the last two decades as the black population has increased from 25 to 67 percent (similar demographic shifts are occurring locally in the lower part of Northeast Philadelphia). Unfortunately a discussion of the health outcome disparities of black and white residents in St. Louis County and in the state in general, has been largely absent. The health inequities that exist in Ferguson begin at birth, last a lifetime, and shape access and quality of care available to all residents. Without the context of the health disparities that exist, the view of Ferguson that we are seeing is through a glass darkly – obscured and unreliable.

In the report “For the Sake of All” co-published by Washington University in St. Louis and Saint Louis University, it is noted that “health is fundamental to human well-being,” forming the basis for a citizenry that is engaged in the community and contributing to an optimized society. By focusing on disparities in education, access to nutritious food, crime rates, and employment, as well as the linkages which exist between these factors and chronic illness, the report highlights the central role of health to combating larger socioeconomic factors in the region.

A further look at some of the disparities that exist in St. Louis County shows that while St. Louis County is 70.3% white (68.9% Non-Hispanic white) and 23.3% African-American, Ferguson has a racial percentage which is opposite of the county’s racial demographics as previously noted. Linked to the racial demographics are the poverty rates in Ferguson, which doubled between 2000 and 2012 as white flight increased in the region.

One of the few health-based stats reported in the media from Ferguson is that African-Americans are nearly 13 times more likely to die by homicide than are their white counterparts.

However, again and again we see across the board that the health outcomes for African-Americans in St. Louis County are consistently and disturbingly worse than whites in St. Louis County and the state average. For instance, the infant mortality rate, often viewed as one of the key determinants of a nation’s overall health, stands at 12.8 for the county’s black population. This number is three times higher than the rate for whites in St. Louis, which stands at 3.8.

African-Americans in St. Louis County have a higher rate of death from heart disease than whites in the county and the state population in general, although it should be noted that the rate has consistently decreased in recent years.

These health outcome disparities cannot be fully understood without an understanding of the context of the social determinants of health. Some of the most widely used determinants include race and ethnicity, sex, age, household income, and educational attainment. However other factors, such as access to mental health services and mass transportation, are critical as well to providing a broader view of people in Ferguson.

In his remarks on the grand jury decision, President Obama noted that we are “a nation built on the rule of law” and that the events that took place speak to the “broader challenges that we still face as a nation.”  There was no mention of the physical, mental, and emotional health of the citizens of Ferguson. No mention of the disparities in chronic disease which impact the day-to-day lives of the people in Ferguson. Most troubling, there was no mention of the deepened chasm which exists along racial lines that determines access to health care. Moving forward, we believe that the tale of Ferguson’s health disparities must be told so that a more nuanced view on what led to these tragic events can be revealed.

2 thoughts on “Ferguson: A Tale of Health Disparities”