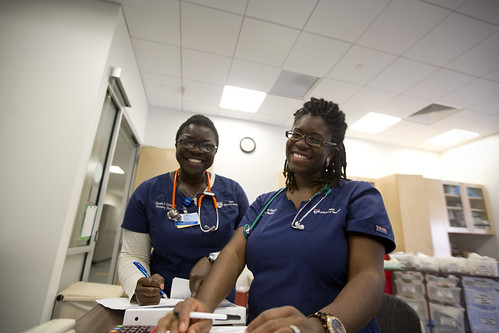 As we conclude Black History Month, it is important to recognize and reflect on the diversity of the nursing profession, with a particular focus on African-American nurses. To understand diversity in nursing, or lack thereof, it is helpful to take a look not just at where we are today, but where nursing has been throughout time. In other words: Has the nursing profession ever represented the diversity of the nation historically? Does historical examination provide relevant trend lines for today and the future? Let’s take a look at the data to find out.

Nurse attends fair at Lankenau School of Nursing, Image courtesy of the Barbara Bates Center for the Study of the History of Nursing.

The stereotypical image of professional nurses as young, white and female was widely accepted and promoted throughout most of the 20th century. Estimates of the demographics of the nursing profession over the last 100 years provide fascinating data on the lack of diversity in nursing and the slow progress in correcting racial and ethnic imbalances. The 1910 census (the first census in which the Census Bureau provided racial breakdowns on nurses) recorded that 3% of nurses were African-American: an abysmally low percentage. The data shows that increases in the number of African-American nurses failed to keep pace with the white population of nurses. For example, between 1910 and 1930 the number of African-American nurses increased 135%. However, this number is dwarfed by the 325% increase for white nurses over the same time period. Things went downward from there with the percentage of African-American nurses dropping to 2% in 1920, 1930 and 1940 as the total number of nurses increased dramatically.

Mercy Douglass School of Nursing Class of 1959 in library. Image Courtesy of the Barbara Bates Center for the Study of the History of Nursing

The reasons behind low representation of African-Americans in the nursing profession are complex and rooted in racism, segregation, economics, education and a host of other factors including the specific uniqueness of nursing as an occupation and the historical context in which the profession developed. The existence of a segregated hospital and educational system for white and black nurses until the mid-20th century discouraged diversity. The American Nurses Association, the leading nurse professional association, failed to integrate until 1948 and several state nurses associations continued to discriminate for years after. These and other contextual factors have the nursing profession still playing catch up in diversifying.

Looking only at African-American nurses does not tell the entire nursing workforce diversity story. Representation of other racial and ethnic minority groups in nursing is even lower. Indeed, if you tally the percentage of African-American, Hispanic, American Indian/Alaskan Native, and Native Hawaiian/Pacific Islanders nurses together, the total is 19%, far below those groups 30% representation in the American population. (And, for those who have noticed, yes, we have not mentioned the percentage of men in the nursing profession—we’ll save that for another blog).

We have come a long way in bridging the segregated gaps that have existed in the American health care system, and in particular the nursing profession. African-American nurses have, on average, more advanced education than their white counterparts and the rates of full-time employment are also higher.  However, historical analysis shows the nursing profession still has a long road ahead to truly reflecting the diversity of the nation.

Jean C. Whelan is a leading nurse historian, president of the American Association for the History of Nursing and the assistant director of the Barbara Bates Center for the Study of the History of Nursing Dr. Whelan’s research centers on the historical development of U.S. nursing workforce, the issues which shaped nursing’s development and the policy implications involved in maintaining adequate nurse services.

One thought on “Does American Nursing Have A Diversity Problem?” 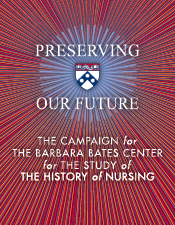